History of the Little Sisters in Philadelphia 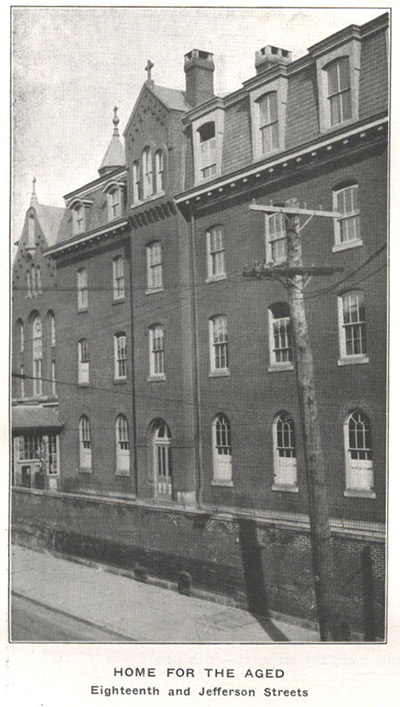 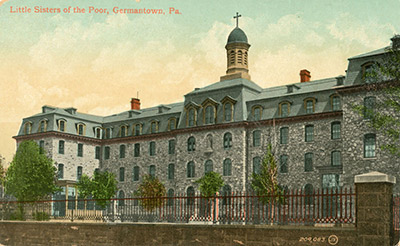 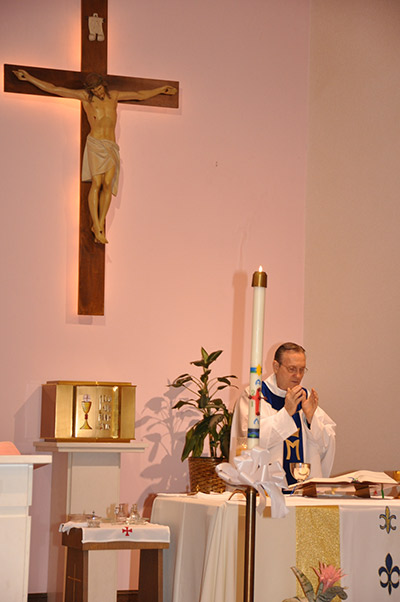 After establishing several “Homes for the Aged and Infirm” in different parts of the United States in 1868 (Brooklyn, NY, New Orleans, LA, Cincinnati, OH, St. Louis, MO), the Little Sisters of the Poor arrived in Philadelphia on August 24th, 1869, and first occupied three row houses on the 1600 Block of 15th Street. They then moved to a new building on 18th and Jefferson Streets and placed it under the patronage of our Lady, St. Mary’s. An early History of the Little Sisters of the Poor by Rev. A. Leroy (1902) reports a touching story about this first foundation:

“Mary Twibill was dying at the age of eighteen. Her father left her the choice of having a fine monument on her grave or of leaving the money to the poor. ‘What use will it be to me to have a beautiful monument after my death?’ replied the charitable young girl. ‘I prefer to give the money to the Little Sisters of the Poor.’ She died on June 13, 1870, and the Little Sisters of the Poor received a thousand dollars.”

The Little Sisters occupied this building until 1958, when extensive building repairs made it necessary to close this Home.

Philadelphia Archbishop James F. Wood offered the Little Sisters a property in Germantown, on 603 East Church Lane, dedicated on August 28th, 1880 on the Feast of St. Augustine and it was placed under the patronage of St. Michael. They first resided in the old mansion which could hold thirty Residents, until a new Home could be built. In this building over 300 Residents at a time could be cared for.

An article in the Catholic Standard from September 11, 1880 describes the mission of the Little Sisters in these words:

“The mission of the Little Sisters of the Poor is one of the noblest of the church. There are very many old people who are in poverty through no fault of their own but merely by force of circumstances. It is so totally galling for most of these to go to the Almshouse and they would almost as soon face starvation and death, as become inmates of an institution in which poverty is treated as a crime and where they know they will be reduced to the lowest depths of degradation. To such the house of the Little Sisters of the Poor is an earthly paradise in comparison, as anyone can easily satisfy himself by visiting it and examining the manner in which it is conducted.”

The Home in Germantown has seen many generations of families volunteering and, more often than not, discovering a vocation to the religious life or the priesthood as a consequence. All are marked by the spirit, exemplified by the sisters, of St. Jeanne Jugan, to spread the good news of the gospel in the concrete aid to the elderly in need of love and respect.

In 1902, five Little Sisters responded to a need in West Philadelphia and established a temporary location at 42nd and Baltimore Avenue which was called Sacred Heart Home. Within a year more than forty Residents were provided care and several others were awaiting places.

On All Saints Day, 1903, Bishop Prendergast presided at the dedication of the cornerstone for the permanent residence on 53rd Street and Chester Avenue in Southwest Philadelphia.

The blessing of the chapel on January 22, 1905, marked the official opening of the new Home with a capacity to care for 300 Residents. The Little Sisters provided for the care of their dear Residents and could be seen about Philadelphia begging and collecting for the poor through use of their donated horse and carriage.

The Catholic Standard of January 23, 1905, describes the Home:

“It covers several city lots, and is constructed of blue stone, and is four and a half stories high, surmounted by a graceful cupola and belfry. The bell which will be installed was presented by Mrs. Margaret Cavanaugh, and at the close of the consecration it was christened by the Bishop “Mary Josephine Margaret.”

The closeness of several Catholic parishes, in particular, Most Blessed Sacrament, provided ample opportunity for the Little Sisters to become known and loved by the neighbors. Many students of the largest parochial school in the United States were early “volunteers” at the home, assisting the Sisters in all the tasks needed to provide a loving home to the Residents, from helping in the kitchen to bathing of the Residents, and remained long-time friends of the Little Sisters.

The Home continued to welcome the poor elderly until the building was closed in 1969 to make way for a more modern facility, as years of wear took its toll on the old wood frame building.

Through the kindness and generosity of the people of Philadelphia, a new home was opened on the same location on April 13, 1973, and was dedicated to the Holy Family, combining the previous three homes, St. Mary’s, St. Michael’s and Sacred Heart. The decision to stay in an increasingly impoverished neighborhood was not an easy one. Security for the Residents and Sisters was provided by the wall and a gate, but would that be sufficient? After consultation with Archbishop John Joseph Krol, who encouraged the Sisters to remain in the area in order to serve the poor and provide employment, it was decided to rebuild on the same property.

Thus, the Little Sisters were able to continue to welcome the elderly of the Philadelphia area. In the tradition of St. Jeanne Jugan, the Sisters depend on Divine Providence and upon the charity of others to help them to fulfill their apostolic work.

From their humble beginnings in 1839, the Little Sisters of the Poor today number over 2,000 members, caring for more than 14,000 elderly persons in about 200 homes around the world, including 30 homes in the United States.

Material deprivation is only one form of poverty. Others that weigh heavily upon a person are: isolation, insecurity, the anguish of feeling that one is a burden on others, or being unwanted, seeing one’s self become weaker and weaker, and in some cases, being abandoned. As Little Sisters of the Poor, we have been able to address this need and have been serving the Archdiocese of Philadelphia since 1869.

With the help of a dedicated staff, the Sisters today care for 97 Residents in Independent Apartments, Personal Care and Skilled Nursing Units. A chaplain, Rev. Douglas McKay, provides for their spiritual needs with daily Mass, devotions and spiritual guidance. The chapel, being the heart of the Home, is a quiet place filled with the presence of God where Residents, staff and sisters can renew their forces and receive abundant blessings from God.

The need for volunteers and benefactors has not changed, and the Home is blessed with many faithful friends who respond to the spiritual, psychosocial, and physical needs of the Residents. In their interactions with the Residents, they realize that they receive so much more than they could ever give. Can you help? What are your possibilities, material or spiritual?

Come and visit us to see how YOU can make a difference in a person’s life.

For more information about Saint Jeanne Jugan and the Little Sisters of the Poor, click here.