Are you a Nurse who is Catholic, or are you a Catholic Nurse?
XXI World Congress of Catholic Nurses in Doylestown, PA August 2-4, 2022

Are you a Nurse who is Catholic, or are you a Catholic Nurse? A wonderful opportunity for nurses from around the world to tackle the challenge of this question by coming together for spiritual nourishment, education, and mutual moral support was being offered in the U.S. for the first time since 1990 when a world congress of Catholic Nurses was held in New York. It was hoped that several Little Sisters could attend the XXI World Congress of Catholic Nurses in Doylestown, PA August 2-4, 2022, but COVID constricted the number to just two. Sr. Maria Catherine of Jesus and Sr. Kathleen of St. Michael were fortunate to commute from Philadelphia to attend these three days which began each day with 7:30 a.m. Mass. For them, it was a spiritual experience to share with nurses from all over the world who are not simply nurses who are Catholic, but indeed, convinced Catholic nurses! The two Little Sisters were uplifted time and again as they heard the participants make spontaneous remarks like:

• “I love Pope Benedict’s paragraph on “Offering it up” in Spe Salvi”
• “JP II’s Exhortation on Mercy never ceases to carry me along!”
• “The USCCB’s Ethical and Religious Directives for Catholic Health Care are easy to access online.”
• “We have other off-duty interests. Thank you, Sisters, for your total, consecrated caring!”
• “I think it’s cool the way Pope Francis cautions us that we won’t come out of the COVID crisis the same, but either better or worse. And “one does not come out alone” but “taking the other by the hand.”

By the way, that last quote from our Holy Father Francis inspired the motto for the XXI Congress of Catholic Nurses: “United in Mission, United in Faith.” CICIAMS, the International Association of Catholic Nurses which collaborates with the Vatican in the mission of bringing together nurses from Africa, Asia, Europe, and the Pan American nations, was founded in Lourdes, France in 1933 to promote spirituality, education, patient advocacy, and integration of faith and health care.

Cardinal Peter Turkson, Prefect of the new Department for the Service of Integral human Development came from the Vatican with Sr. Emanuela Edwards, MDR (Missionaries of Divine Revelation) an official guide for St. Peter’s Basilica. Cardinal Turkson presided at the magnificent Eucharistic Liturgies, gave a livestreamed Global Address to Catholic Nurses on Integral Ecology and then shared box lunches and informal conversations with the participants. Sr. Emanuela was interviewed by Radio Host Patti Staley, RN during an afternoon session.

In her interview, Immaculée Ilibagaza, survivor of the 1994 Rwanda genocide, emphasized humility and trust in our Blessed Mother and then she “walked her talk” – she so simply joined the participants for liturgies, pauses for devotions, times of adoration, and exchanges during lunch breaks.

The whole Congress was very worthwhile and informative. Presentations on the right of conscience, informed consent, end of life issues, cultural competency, compassion, and redemptive suffering, with their opportunities for questions and answers, were particularly pertinent for us Little Sisters. The schedule was intense, but that didn’t prevent time for praying the Chaplet of Divine Mercy each day at three o’clock and listening to real life stories from Catholic Nurses from all over the world. Indeed, we all came away from the World Congress grateful for the useful information and enriched with valuable insights and moral support for being Catholic Nurses! 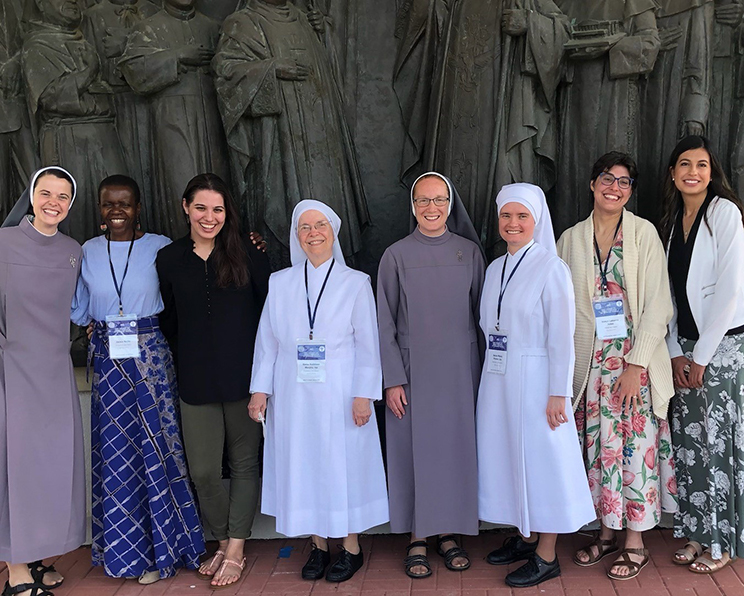