On July 20, the Little Sisters, Residents, staff and friends of our home participated in the creation of a mural that will be erected as a memorial to the Holy Father’s Visit to our beloved city. 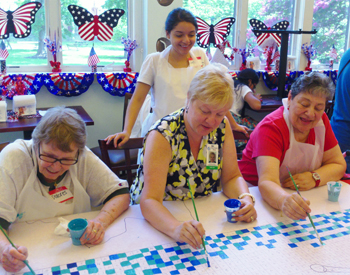 The mural is being orchestrated by the Mural Arts Program, a Philadelphia institution since 1984. The new artwork to honor Pope Francis’ visit is called “The Sacred Now: Faith and Family in the 21st Century.” It will be installed on the external walls of St Malachy’s School. The 4,239-square-foot mural, by Cesar Viveros, is to be created from 153 5’ x 5’ panels, to be installed across three sections of the school building. Some of the panels are being painted by ordinary Philadelphians like us, and others will be painted by participants in the World Meeting of Families in September. The completed mural will be erected in November.

We worked on several of these panels in a “paint-by-number” system. It was great to see how the members from the Mural Arts Program patiently showed the Residents where to paint (and where not to paint). And then the intensity with which the Residents painted was extraordinary.

You could sense a real seriousness, as everyone was aware that their art work would last for decades. And then there was the excitement of knowing that the Holy Father would see the panels during his visit to Philadelphia! But even more so, the Residents were awed that they were going to leave a legacy of beauty for the children to play in where there had been only drab bricks and mortar. Admittedly, our contribution was small, but nothing is small in life when it is done with great love, as our foundress Jeanne Jugan would say. And the Residents were certainly filled with love during this project.

Some of the Residents stayed for the whole afternoon, patiently changing colors and brushes as needed. We also had invited volunteers and staff members to participate, and so the project became truly “collaboration,” a work done by many hands. We may not have completed all the panels (we got about four or five finished), but we did our part, so that the young may have some beauty in their lives as they learn and play.