“The Song is Ended but the Melody Lingers On”
Notes from Mother General’s Visit to the U.S.A. 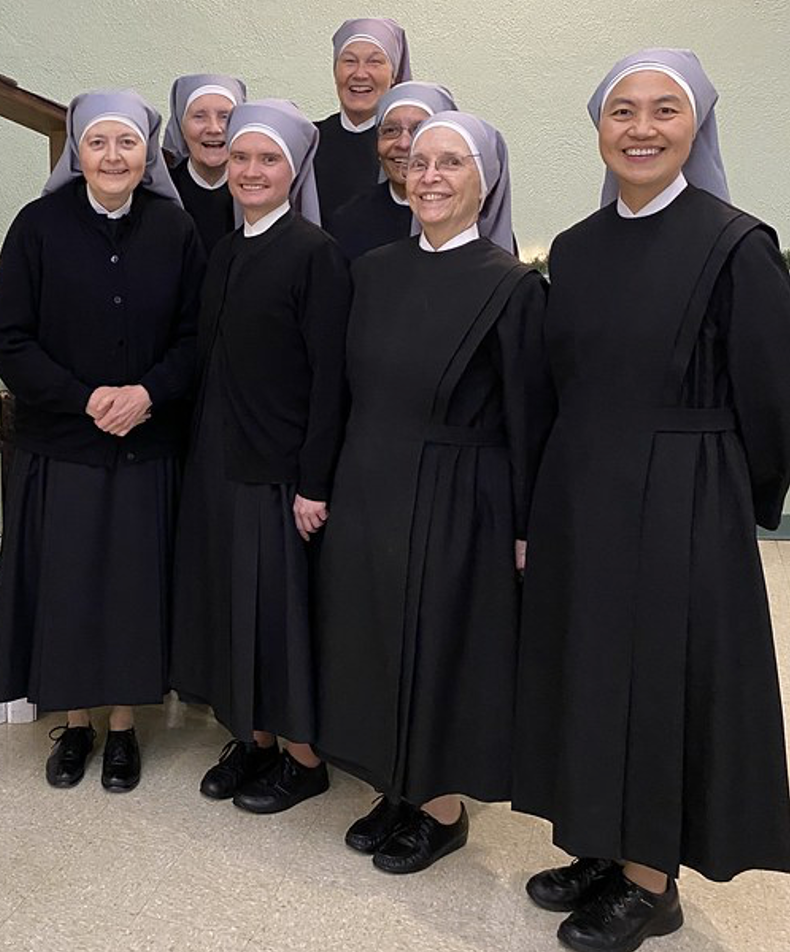 Early Sunday morning, December 19, 2021 a van-full of Little Sisters from Holy Family Home drove off to see Mother General from France, in person, in Queens, New York. At the front door, seeing them off, was our Centenarian, Rose A. With full voice she called out: “Tell Mother General we love her and she’s doing a great job!” When Rose’s message was conveyed to Mother Maria before a group of about 60 Little Sisters, there was a hearty applause. 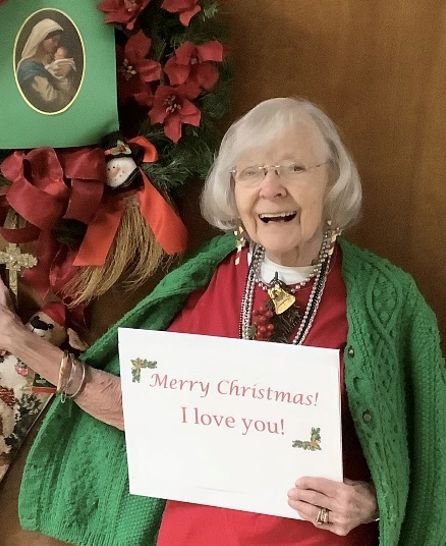 December 2021 will go down in LSP history as the month of the momentous first visit of Mother General Maria and Mother Assistant-General Joseph Christine to the United States. They arrived in Palatine, Illinois on November 28, 2021. This visit had been planned for last year, but was prevented by the pandemic, so their safe arrival had the air of the miraculous. Along with the Little Sisters was a large contingent of Residents, Jeanne Jugan Associates, and Staff, all there to cheer their blessed victory over so many obstacles. In each of the three Provinces, Mother General Maria arranged maximum face-to-face contacts with her Little Sisters, either by Zoom or in person. Chicago, the farthest Province, was the first to experience this thoughtful, individual attention. Then on a strangely balmy December day (Dec. 6), Mother General Maria and Mother Assistant Joseph Christine flew from Chicago to Baltimore to begin the second stage of their USA visit. There they received a welcome no less enthusiastic than in our sister homes in Chicagoland. Mother Maria was in awe to meet so many Residents and staff members from so many different countries. Internationality is definitely a hallmark of our Homes in the USA! 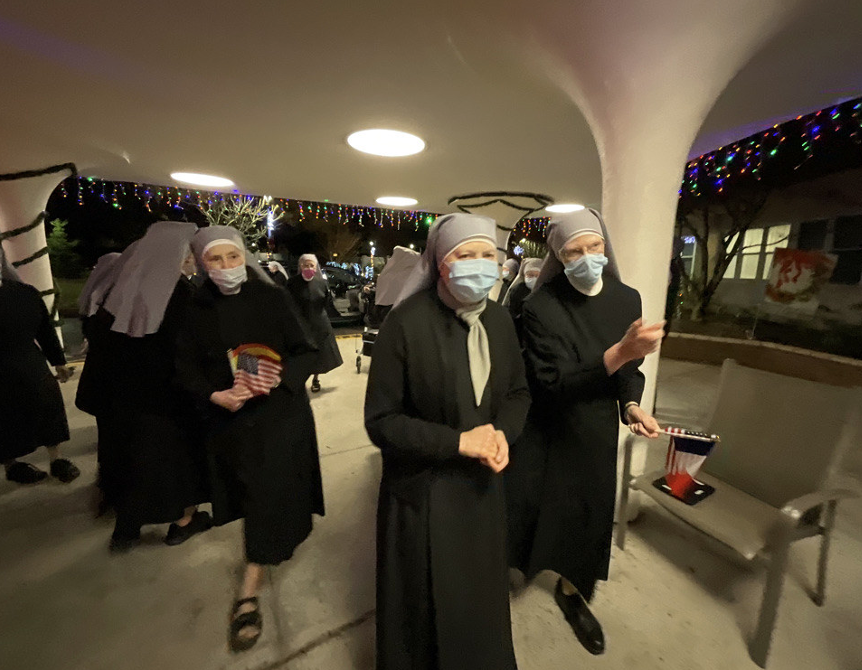 On December 13, 2021 Mother General Maria and her companion traveled by car from Baltimore to New York, with a brief but very beneficial stopover in our Home in Newark, Delaware. They arrived at Queen of Peace Residence in the early evening. After a good night’s rest, they were swept up in the enthusiastic celebrations of the next day, all in their honor. Our Mother Celine Thérèse and all the Mothers of the Province gathered for prayerful exchanges, lighthearted recreations, and Eucharistic Adoration with Mother General Maria from December 16th until her departure from the U.S. On December 17, 2021 “Zoom” brought Mother General Maria and Mother Assistant Joseph Christine right into each of the community rooms of the Province! Brooklyn Province’s IT (Information Technician) Martha Calad, AJJ, had painstakingly prepared each community for this virtual encounter by setting up one large screen where we could see each community sitting together in their recreation room. I-Pads were passed around so that Mother General Maria could address each Little Sister by name and each Little Sister could see Mother General Maria and speak with her. Blessed be God for modern technology! We felt so close to Mother Maria and with each other! What a thrill to have this one-on-one virtual visit with Mother Maria and to see Little Sisters in other Homes from whom we had been cut-off over the past year-and-a-half or longer! 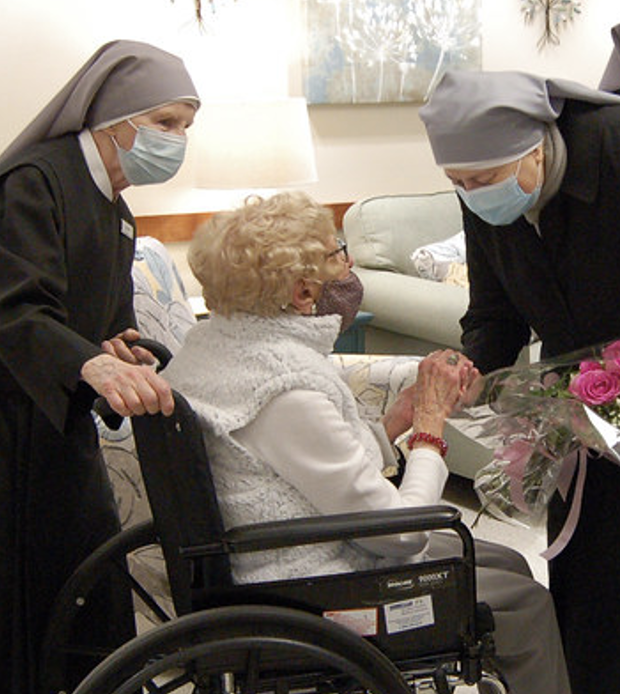 Then came the final family feast of Mother General Maria’s visit to the U.S.A. Being within driving distance, as many Little Sisters as possible from Philadelphia, Bronx, Totowa, and Flemington joined the Novitiate and Queen of Peace Communities as well as all three Provincial Councils for a real live get-together with Mother General Maria. What a joy to share a meal with her and so many of our Little Sisters whom we had not seen in person since the beginning of the pandemic! We were touched by Mother General Maria’s warmth and simplicity as she greeted each one by name, as she went to the piano to play for us, as she recounted anecdotes, as she drew out humorous stories and engaged us all. We were amazed by how spontaneously she responded to our questions about Little Sisters and Homes all over the world, without any notes! Our Mother Celine Thérèse drove home with us and eagerly shared her experience over the past few days. 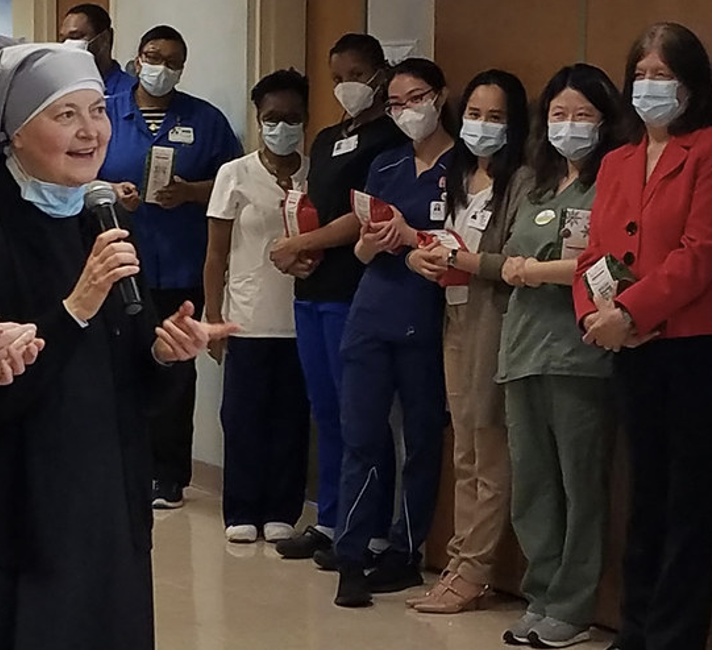 On December 20, 2021, before boarding the plane to return to France, Mother General Maria sent a message to us all, thanking us for the warm welcome and encouraging us to stay happy, to be together with our Residents and staff, keeping alive the spirit of St. Jeanne Jugan. Everyone agrees: “The song had ended but the melody would linger on.” This time of grace would continue to bear fruit in our personal lives, in our religious community, and in our extended family of Residents and Co-workers here at Holy Family Home. 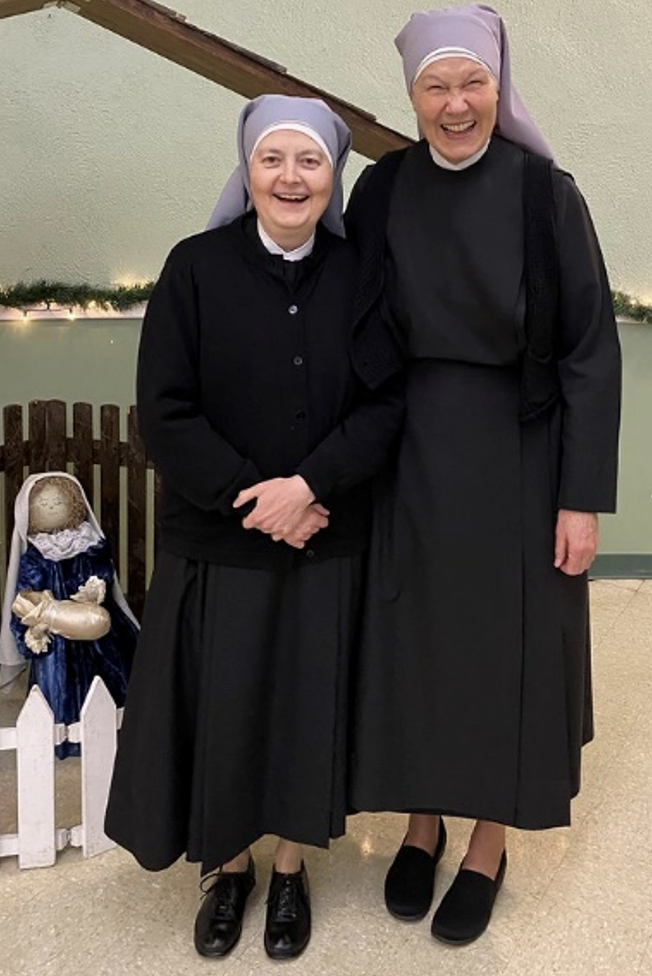